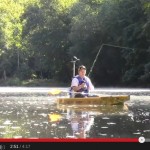 Sometime late in 2013 I began to see articles and blog posts complaining of changes to YouTube’s ContentID system. The system is designed to flag videos containing copyright-infringing content and offer the owner of the content a chance to monetize the videos in question or have them removed from YouTube. I didn’t pay much attention as most of the complainers where YouTubers that were creating videos with in-game content. However, in the middle of December, the controversy paid a visit to one of my YouTube channels.

The channel is called “Great Cove Adventure Films” and is where I post videos of outdoor adventures such as fishing and hunting. In the space of three weeks, I received notification from Youtube that three of my videos contained copyrighted content. The videos effected were these:

The party making the claim is called IndMusic, a company that is becoming known for these sort of claims. Supposedly, the background music in my videos infringed on the copyright held by an artist they represent. The thing is, this music wasn’t something of questionable origin or something I ripped off a CD. I had purchased the songs in question in January 2013 from an apparently reputable company called Partners in Rhyme. The stock-music collection cost me $99 and was called Sacred Hymns. It included several soft instrumental hymns that I thought would go well with my outdoor videos. The receipt and license agreement from Partners in Rhyme clearly stated that I was purchasing the right to use these songs as background music for video projects. Furthermore, the license stated that Partners in Rhyme had the necessary authorization to grant me those rights, and that their agreement with me did not infringe the copyrights of any third party. So in spite of me acquiring this music the “right” way, YouTube was notifying me that IndMusic held the rights to the music and future revenue from advertisements would be shared with them instead of me.

Thankfully, YouTube allows a video creator to appeal. I took advantage of that and appealed the claim on all three videos. I explained in each of my appeals how I had legally acquired the music. In a few days IndMusic lifted the claim on two of the three videos. However, they didn’t lift the claim on my cardboard boat video. On January 17, 2014 I received a notice from YouTube that IndMusic had reinstated their claim on my video. I could file a second appeal, but this time the stakes would be higher. I would have to share my contact information with IndMusic, and they would be free to take legal action against me if they still felt that my video was infringing. In addition, if they turned down this appeal YouTube would place a copyright strike on my YouTube account. For a small-time YouTube creator, the risk is simply not worth it. I should be able to assume that my appeal would be granted, but since it was denied once it certainly could be denied a second time.

So what choice do I have? The video is still active, so I can just leave it there. However, all revenue sharing from it now goes to somebody who probably does not deserve it, basically rewarding IndMusic for filing a claim that appears to be invalid. So as soon as I can put different music with the cardboard boat video, I’ll be pulling down the old one and putting up a new one.

So who’s to blame for this madness? The short answer is, I don’t know. Are IndMusic and YouTube over-zealous in their copyright policing efforts? Did Partners in Rhyme sell me rights without proper authorization? For what it is worth, it appears that the stock music collection in question is no longer being offered by Partners in Rhyme. I left a voice-mail for them today (January 18, 2014), but so far I have not heard from them. I strongly suspect Partners in Rhyme is the innocent party, but they are likely the only company of the three that I’ll actually be able to have a conversation with.