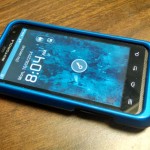 I recently became the owner of a retired Motorolla Defy Xt that had been formerly used with service from Republic Wireless. My 7-year-old loves electronic devices and cameras, so I thought it would make a nice gift for him. Of course, there were a few problems: First, I needed to remove dialing capability. Even without a plan, cell phones can make emergency calls, and I didn’t want the police showing up at my door because of my son inadvertently dialing 911. Secondly, I wanted to remove some of the stock apps that my son won’t be using, like YouTube and Google plus. In the end, I wanted to have a device that allows taking pictures and listening to music, but not much else.

After some research, here are the steps I used to accomplish my objectives. Just a friendly reminder: Rooting your phone may make it inoperable! These steps worked for me but are offered without a warranty of any kind.

1. Root the Phone
To do this, simply download, install and run the Cyanide.apk application. You may need to change your security settings to allow third party apps. In my case, trying to run the APK file took me to the appropiate screen to make the change to the security settings. Once you install and run the APK, the phone will automatically reboot a couple of times, and the job is complete.

2. Install the free version of Titanium Backup
Titanium Backup is available on Google Play. It allows you to backup and uninstall existing applicatiosn on your phone. If your phone is rooted, as ours is, you can even remove stock apps that normally cannot be uninstalled.

3. Remove the Dialer and Republic Wi-Fi apps
Once Titanium Backup is loaded, launch it and tap Backup/Restore. Here you’ll see a list of installed applications. The one you want to remove is called Dialer (in my case, followed by the version number 2.3.7). So click on the dialer and click backup so you can restore it later if needed. Then click on Dialer again and click Uninstall. Once the Dialer is uninstalled, you’ll see an error message appear on the screen. Closing the error message will make it appear again and again. To stop this, hold the power button in for a few seconds and menu with the options Silent Mode, Airplane Mode, and Power Off will appear behind the nagging error message. Then acknowledge the error message one last time and quickly tap Power Off. Once the phone has rebooted, the nagging message should not come back, and you will find that you cannot make calls. You can still enter a number into the dialer interface, but trying to make the call will just display an error message. It will do this for 911 calls as well. I also uninstalled the Republic Wireless Wi-Fi Setup app as well using these same steps. The standard Android Wi-Fi settings are still available.

That’s it! Obviously, you may want to uninstall other apps as well, but this should give you the information you need to do so.