One of my more interesting recent projects has been turning an old miniature satellite dish into a parabolic solar cooker.  I recorded four YouTube videos showing the construction process, testing of the dish, and cooking with it.  Enjoy!

The design of the solar oven in this video is based loosely on the “Minimum Box Oven” plans located at www.solarcooking.org/plans. Dimensions are about 15 x 24 (I’ll double-check this and possibly edit later).

The base was built pretty much according to the plans, but I diverged a bit on the lid.  Instead of using an oven bag to cover the opening, I opted for a piece of glass.  On a previous oven, I had tried Plexiglas, but it apparently does not stand up to the heat – after two seasons it started to get “cloudy”. 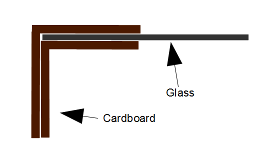 First, I constructed the lid according to the plans, but instead of leaving the cardboard cut-out attached for use as the reflector, I removed it completely. Then I measured entire width and length of the cover and purchased the glass cut to size at my local hardware store. Then I made a second lid to fit snugly over the first one, with the glass trapped in between them as shown in the diagram.

The plans have three suggestions for improving efficiency, all of which I followed more or less:

Suggestion 1: Make pieces of foiled cardboard the same size as the oven sides and place these in the wall spaces.
My implementation: I followed this one, but I did not foil the cardboard.  I just filled the space between the boxes with layers of cardboard.  This makes the oven very sturdy.

Suggestion 2: Make a new reflector the size of the entire lid (see photo above).
My implementation: I followed this suggestion as well.  You then have to make your props in a “U” shape instead of a “Z” shape as shown in the plans.

Suggestion 3: Make the drip pan using sheet metal, such as aluminum flashing. Paint this black and elevate this off the bottom of the oven slightly with small cardboard strips.
My implementation: I used some aluminum flashing I had laying around and painted it with black paint.  I used the non-toxic type of paint

that is designed for grills.

to work very well for cardboard projects.  I bought a roll years ago, and I have built two solar ovens, a cardboard footstool, and a cardboard boat and there is still plenty of tape left on the roll.  You just cut the length you need, brush on some water with a foam brush, and stick it on.  It is very strong, paintable, and presumably less toxic than plastic packing tape would be.